Do’s and Don’ts of Kratom

This is not intended to be medical advice or to treat and cure any illness, it’s just information. As always, talk with your physician about the use of Kratom. 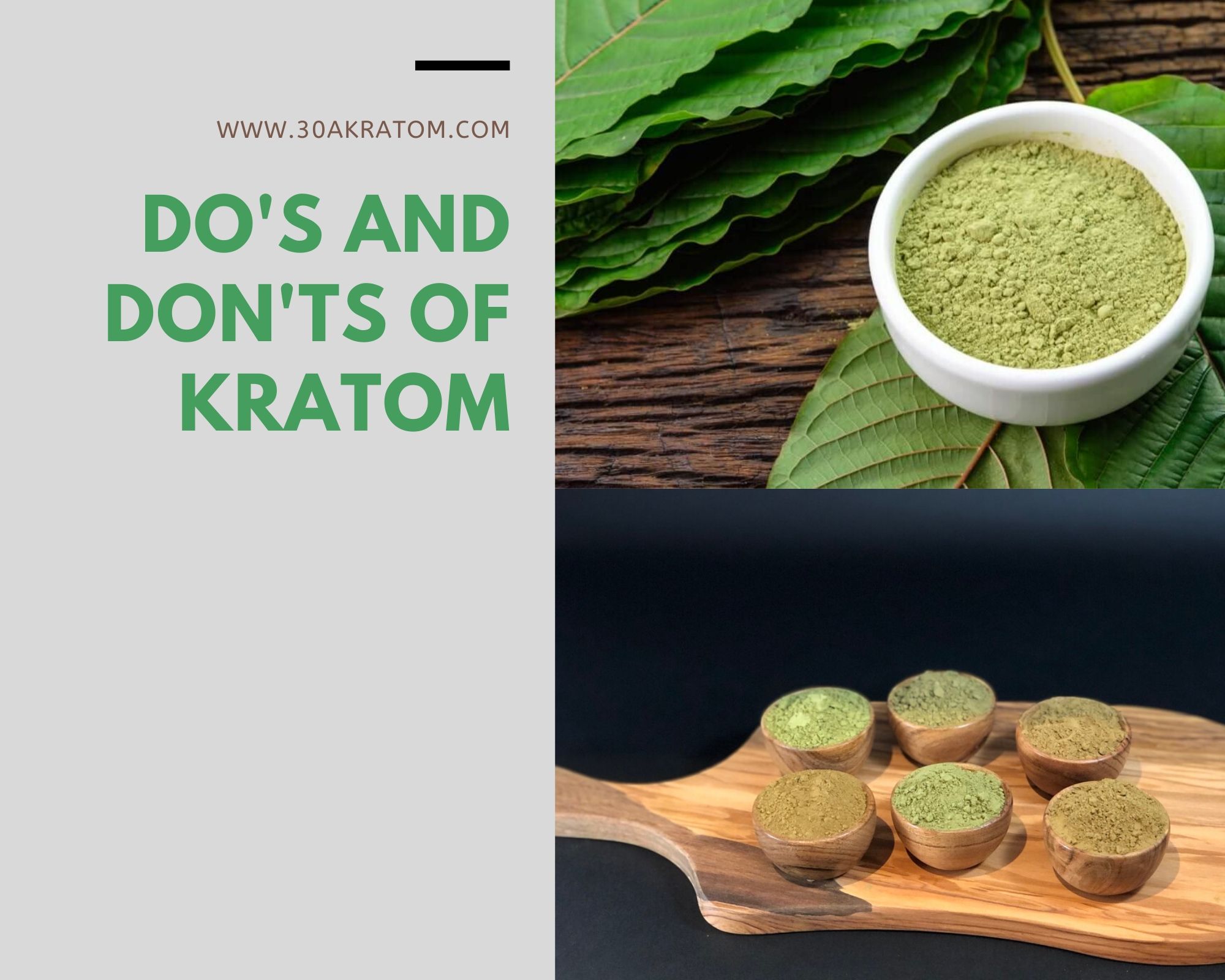 As a natural herb and treatment, kratom is chock full of benefits. When used correctly, kratom can reduce stress, relieve pain, boost your energy, and help you to feel more focused and motivated. Kratom is not an opioid, it is not derived from or related to the opium poppy. However, Kratom is a plant that contains alkaloids the are active on the human opioid receptors. These principal psychoactive alkaloids of Kratom are Mitragynine and 7-hydroxymitragynine. These alkaloids are active on the opioid receptors but in a different way and much weaker than actual opioids and synthetic opioids. Kratom has a much weaker affinity at human opioid receptors and does not cause respiratory depression. As you may know, the primary cause of death in the event of an opioid overdose is respiratory depression. This makes kratom a much safer alternative to traditional opioids as it is impossible to overdose on Kratom. If too much kratom is ingested the user will get extremely nauseous and then vomit. At this time the DEA and FDA are waging a war against Kratom and they are falsifying and exaggerating its effects. People have died with Kratom in their systems but only when accompanied by large amounts of alcohol, benzodiazepines (tranquilizers) or other drugs. No has ever overdosed on only Kratom. The Big Pharmaceutical companies hate Kratom because it can be used to taper off heroin and other super-powerful opioid drugs. Kratom can take the place of methadone and suboxone/Subutex and is less addictive and more effective for tapering people off hardcore opiates. This causes the rehab clinics and the addiction doctors that peddle Methadone and Suboxone a lot of money in lost customers, and Big Pharma takes a huge hit because they are not selling as much methadone and suboxone/subutex as they would if Kratom were not available. This is the reason that there has been such a push to ban Kratom on a federal level.

At 30A Kratom, we want to encourage all of our customers to be responsible in their use of kratom. So here are some of our recommended “do’s” and “don’ts” when it comes to kratom:

DO Measure and Watch Dosage

As with any other drug even coffee or sugar, the dosage is important. You should own a gram scale and keep track of your dosages. Gram scales are very cheap and readily available and easy to use. Kratom dosages are best measured in grams. While some kratom users will measure kratom in terms of tablespoons, we want to reiterate that the most effective way to measure it is with a scale. If you use premium kratom, 3-5 grams is considered a mild dosage while 12-25 is considered very strong. For ultra potent kratom, 2-4 grams is considered mild while 8-16 grams is considered strong. Sticking to reasonable dosages is the best way to avoid adverse side effects that can come from too much kratom.

This is true of many other legal drugs and substances, including prescription drugs you may be taking for illness or health issue. Substances naturally interact with each other, and the effect of taking Katom alongside large amounts of alcohol or tranquilizers can be potentially dangerous. However, as far as kratom’s safety profile, not a single death has been traced solely to the use of Kratom while over 400 people per year die from tylenol/acetaminophen overdoses in the United States each year.

Kratom is very nearly harmless when taken in the recommended amounts. The main side effect is constipation.

Do Your Research on Kratom

Research the kratom dispenser that you choose to buy from. Take a look at their reviews. What do their customers say? Is the product pure ground dried kratom leaf or has it been adulterated with something else? What strains do they offer? Most importantly, how was it harvested and cured? Were the conditions sanitary? Before you purchase kratom, you should also do research on how to take kratom, what strains of kratom are available, and what the different effects might be. We at 30-A Kratom work directly with organic Kratom farmers that have been farming Kratom for generations. Their processing methods are clean, sanitary and the end product is pure kratom as nature intended.

DON’T Settle For the Cheapest Kratom

You’ve no doubt heard the phrase “You get what you pay for.” That’s true of kratom as it’s true with may other things. If you see kratom that seems too cheap to be true, it probably is. At best, you won’t be able to enjoy the effects you expected from kratom. At worst, it could even have adverse effects. Quality kratom may be pricier, but it will be well worth the money. Many “gas stations” Kratom products contain trace amounts of kratom, but in reality they are using Chinese designer opioids to cause stronger effects or a strong high. These compounds can be very addictive. This is dangerous and it’s like playing Russian roulette with your body. These Adulterated pseudo-Kratom products give ethical Kratom dealers a bad name and that is very unfortunate.

DO Keep Up a Healthy Diet

One of the side effects that sometimes comes with Kratom use is constipation, which is why it’s important to keep flushing your system by drinking plenty of water and eating foods that are high in fiber. As with coffee, alcohol, and many other substances, you don’t want to consume a large amount of Kratom on an empty stomach, so make sure you’re staying healthy with your diet as you take kratom.

Have any more questions about how to use kratom responsibly? DO contact 30A Kratom today! We’re happy to help answer any questions you might have, as well as talk through the various strains that we offer and recommended dosages.